STORY STRUCTURE – STORY LEGS – HOW TO CREATE THEM

Here I am: on Charles Harris’ blog:

Today we have the first of a fascinating two-part post from guest blogger Yvonne Grace on story structure for TV series and serials, Creating Story Legs. Yvonne is an experienced writer, script editor and producer of TV series and serials, and the author of a brand new book on writing TV series – details of the book and her own sites at the end of the blog.

Everyone has a story. Whether you believe your story is mapped out at birth – by a higher Deity; God. The Universe. Your Mum. Or if you believe you are in control of your own personal life path; so it begins when you take your first breath and every thing that happens to you and every choice you make alters and changes that life path as you go through your days, Season by Season. 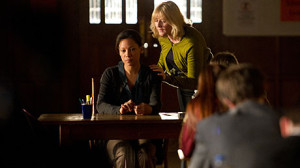 Whether you control this or Madam Betty or Jesus or Jiminy Cricket – it matters not in my analysis here because I can say categorically that there is a beginning, there will be a mid point and you will have your ending. You will ultimately get there. To that end point. To the point where you (unless you have a sudden death – which is a no no in a writer’s opinion, as this does not leave room for reflection and sage reminiscences) where you – get to say a few sage reminiscences, or maybe emit a line or two from your heart which may go viral – later – when you won’t care and may well be circumnavigating the globe as a gas.

Everyone that has been and gone before us shows us – the story tellers of the now, that there is a path to be trod. The beginning, the middle and the end. And that is called the 3 act structure. In most screenwriters’ parlance. But that is too simple for us television types.

We do not, as a rule, hold with the restrictive 3 act structure mantra.

Episodic television often has a multi-act structure. Anything from five acts upwards; depending on the length of format (30/60/90 mins).

Plot Twists and the Penultimate Out Point.

In television it is often easier to think of splitting your story line into the bigger act chunks (say 5 for the sake of argument) and then dig into each act giving at least 3 twists per act. Then at the mid point of your act structure (act 2/3) there are a couple more plot twists, and by the 4th and 5th act, your storyline will begin to feel properly expanded, explored and layered. In the final act, you will come to the Penultimate Scene before the End Scene.

Penultimate Out Points are very important in television – writers need to plot and plan the lead up to The Out Point – or end. The scene before the final scene is often just as compelling as the end scene itself. It feeds the final scene. It leads us there.

Example of a Plot Twist;

Caroline, the professional, slightly icy, permanently preoccupied 40 something mum, is, in the mind of the audience, a character that knows exactly what she is doing from the minute she wakes up to the moment she goes to bed. Her story is one of control and also having to be the coping grown up adult. Not least because her marriage is a failing shambles; largely due to her failing, shambolic estranged husband.

So when we see her drop her guard and in fact fall in love with someone it is a surprise and doubly so because the person she falls for is female. Ball breaking Caroline we expected. Lesbian Caroline who has to learn to let go, we did not.

Example of a Penultimate Out Point;

The scene which leads us to the long-awaited confrontation in the narrow boat between Catherine the beleaguered, take no prisoners Cop/Grandmother, her vulnerable grandson Ryan and the psychopath Tommy, is an exterior of that volatile, tense internal scene, shot in the boat, where Catherine attacks Tommy and rescues Ryan from his clutches.

This ultimate confrontation is set up subtly by Sally. Catherine, the Cop and her long suffering sister Clare, rush down the steps to the canal path below. Clare tries to slow Catherine down; she doesn’t want her rushing in where angels fear to tread. Catherine couldn’t care less. They both stumble and fall. Catherine hurts her still bandaged arm. It looks bad. This scene sets up the preconception that things could only now, go from bad to worse.

The Story Necklace, Moments, Milestones and Back Story

Across the Series or Serial (The Long Form Format), writers creating story legs for their storylines need to think in the following way;

Firstly, that your storyline – the main throughline of the series you are writing – otherwise known as the Serial Story Arc, is a string on which you hang the beads of each separate episode in the serial as a whole.

The Series Story Arc is that which is summed up in the logline, or selling paragraph of a series idea; it is what the drama (enfolding over a number of episodes) is actually about.

Orange is the New Black:

Piper Chapman’s wild past comes back to haunt her, resulting in her arrest and detention in a federal penitentiary. To pay her debt to society, Piper trades her comfortable New York life for an orange prison jumpsuit and finds unexpected conflict and camaraderie amidst an eccentric group of inmates.

There is a shape to each episode, set by the tone and style of the Serial Story Arc. Each episode reflects that story and the style of writing within it. Also, each episode is defined by the characters within and the stories they push and develop through the episodes.

In this way, each episode gives the Series or Serial as a whole, a cohesive, ‘branded’ quality that reflects both the creative, dramatic intention of the Producers, but also the expectation of the audience. (And so, this cohesive product, is delivered to the right demographic who accept it willingly, and expect more).

Secondly, that within your Long From Format, each episode also has a strong narrative throughline that pertains purely to that episode. This is often called The Story Of The Week. This story is introduced and resolved in each episode. The serial element of the format being carried by the core returning cast. And this serial element is what links each episodic ‘bead’ to the next one.

Example of a Long Form Format show with a story of the week structure:

Taken from the BBC website, here is a précis of a Doctors episode. To illustrate the A and B story line point, I have split their logline into two.

The A story: After discovering their shocking secret, Niamh faces a race against time to save the lives of three young men.

The B story: Karen rediscovers her fearsome maternal instinct.

Not all Series and Serials have a story of the week format. Broadchurch, for instance, does not. The Serial Story Arc; the search for the killer of the dead boy found in Ep1, forms the backbone to this show. But each episode does rest and focus for longer, on the particular players in this story of a community torn apart by a child murder.

In this way, each week we have an A story that focuses on the motivations/actions of for example, DCI Ellie Miller. The next instalment’s A story line is focused on that which drives DCI Alec Hardy.

In each Long Form Format show, there will also be a sister story line that runs parallel and concurrent with the A story line, so for example, we see how Alec Hardy’s behaviour affects and influences Ellie in a B story.

A smaller, less significant but non the less colourful story line will under pin ‘the big guys’ (the A and the B) and form the C story line. In a series like Holby City, or Doctors for example, this will often be a more comedic story line; one to add light to the darker elements of the episode.

To be continued in Part Two…

If you want to write for television and learn more; there are a few ways Yvonne can help you:

Buy her book: Writing for Television; Series Serials and Soaps from Amazon